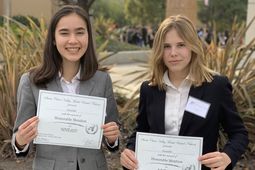 GISSV's MUN team attended at the SCVMUN last weekend and Francis B. and Carmen R. won an award for their convincing performance.

By Martin Lenzen, Head of Economics

This year on January 25 and 26, 4 students continued the tradition for the 4th year in a row and spent the weekend discussing current political issues such as the development of rural education and illicit organ trade. The conference was chaired by dozens of graduates from prestigious colleges such as Stanford, Berkeley and UCLA.

Francis and Carmen represented their countries interests (Ecuador) with passion, sent hundreds of notes to their fellow delegates in their UNESCO committee and held multiple speeches in front of the committee. Their hard work was recognized by the experienced chairs and they were given an award at the closing ceremony in front of hundreds of students.

This achievement would not have been possible without the meticulous support and guidance of our club's founder Sarah K.