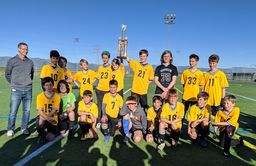 We are the Champions!

The MS Boys Soccer team successfully defended its Championship title with a 5-3 victory against Hausner on Wednesday, March 14 at Twin Creeks Sports Complex in Sunnyvale. The team 2019 record is now 8-0-1. GISSV MS Boys Soccer has won three Championships (2015, 2018, 2019).
In the first 10 seconds of the game, Robin W. (7th grade) received an aggressive kickoff pass, beat the Hausner defender and rocketed the ball into the back of the net. But Hausner regrouped and managed to keep the game at 1-0 for the next 15 minutes despite multiple attacks and better ball possession by GISSV. Then Hausner managed a quick counter-attack that penetrated deep into our half and slipped in the near post to tie the game 1-1. It was clear that the game would not be like the "easy" games that were typical of the regular season. By the end of the 1st half, however, both teams had found the back of the net. But it was GISSV that came out on top by half-time with 4-2.
The Eagles were tasked with maintaining what had worked so well in the 1st half - quick give-and-go passing, movement off the ball and covering Hausner's most dangerous player. Hauke R. was assigned this last, unenviable task, but he was up to the job and prevented the comeback that Hausner was otherwise quite capable of launching.
GISSV attackers made it a 5-2 game early in the 2nd half, but Hausner quickly responded with its 3rd goal after a GISSV foul put our opponent in striking distance. Even as things got shaky for both teams with multiple substitutions in the final 15 minutes of the 2nd half, the score remained 5-3 at the final whistle and GISSV could celebrate its victory.